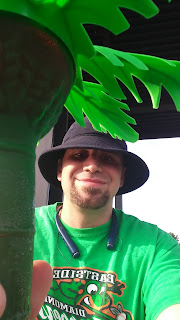 On 24 November 2019, I had uploaded a video of my ugly-self telling any interested fans out there that my next to EAS scenarios will likely be my last two. With YouTube's new TOS and also the threat of knocking down channels that aren't “commercially valuable,” it is quite likely that my channel is on the chopping block. YouTube pays quite a lot of money maintaining bandwidth for many vids that aren't making them money. Plus, people also podcast on YouTube. For folks who aren't popular or not so popular (like me) who are uploading vids 30 minutes or more, YouTube is paying. And it looks like they don't want to pay no more.

These new rules begin on 10 December 2019, I don't believe my channel is going to get knocked off the platform by that day, but I imagine it would be getting knocked off later. They will eventually take a look at my channel, see my mediocre number of subscribers and the length of my videos and then press the delete button on my account. Again, I think it's mainly a bandwidth deal. I don't think it's a freedom of speech or political deal. But also, COPPA plays along with this big time. I’m not too familiar with COPPA but the idea of being fined $42,000 for a violation is quite scary. I’m kinda rich but I don’t have $42,000.

Also, YouTube has been trying to be a Netflix. If they want to go to that next level, things have to change. Besides, YouTube doesn't have any obligation to keep me up. Until the WishesNetwork channel meets its doom, I'll keep the vids up and after Supernatural Threat II EAS, it's unlikely I'll continue after that. Unless some deal comes up that intrigues me to continue, you got it. But my best guess is that's not going to happen. For those who still take a liking to me, this here is my blog. It won't be updated on a daily basis, more like a biweekly basis.

This blog will be less of opinions and more of my travels around the Detroit area. Something I haven’t been doing much in the year 2019 is going to concerts. I like going to concerts and local events, so I’ll be doing more of that in the year 2020. I saw Fleetwood Mac on Devil’s Night 2018 with a price of a floor seat at over $250. After that, I thought to myself, let’s try something different. I went to Astronomicon and Michigan Comic-Con and met a few celebs. But I kinda miss the concerts and also seeing some comedians. I’ll be posting my event-goings on this blog.

Also, why in 2019 I made only 3 EAS (soon to be 4) vids? 2019 was a busy year for me and I got promoted. I don’t wish to elaborate on my so-called professional life on here or on YouTube, I’ll say this, I work in the Automotive Industry and do food delivery on the side. But also, in the early to middle months of 2019, some troubles arose, both physical and mental and besides the busy life, I fell on black days (Soundgarden song reference). So, making 40-minute EAS vids took a back seat.

And with YouTube’s new deal (if so it is), making 40-minute EAS vids are going into the trunk.

PS. I plan on making another “update” vid between the Supernatural Threat two-parter. And also, there will be a domain for this blog coming soon.

Posted by Robbie Thomas at 4:25 PM