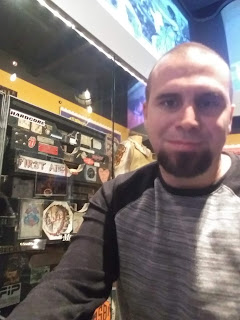 Between Christmas and New Year's, I take a day trip usually to the thumb area of Michigan. I also usually do this during summer shutdown until 2019 when I got promoted at my job and I didn't see time off during the shutdown. The Only Exception besides this one was I went to Muskegon to visit my brother and my new nephew who was born in October 2018. The Rock and Roll Hall of Fame to me is a joke. One of the big pioneers of the Rock and Roll Hall of Fame is Rolling Stone magazine. Back when I was in my preteen too early teenage years, I would read Rolling Stone magazine as it would have news and interviews of some of my favorite grunge bands out there. I began to lose interest, mainly due to more political articles they had on there.
The Rock and Roll Hall of Fame cost $26 for an adult to enter. They also have a restaurant there that serves craft beer. They didn't have any Angry Orchard so I wasn't interested. The building has four levels with the basement level having a majority of the artifacts. It mainly starts with the 40s and 50s music and you eventually get to the 90s. One exception though, in the Elvis area, there was a separate room dedicated to the former Vans Warped World Tour. That's where I got the news that the tour ended in 2018. Kind of wish I attended one of those now, too late! Since I'm not a big fan of most music before 1970, I passed through the beginning arrows displays rather quickly. My least favorite genre of music is surf rock, that music makes me depressed.
In one section of the basement (as I call it), they had a wall dedicated to the Beatles and on the other wall, the Rolling Stones. I took an interest in the following: 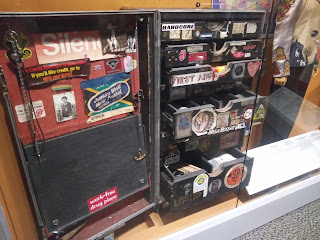 Also, in the basement were some touch screen computers with information on one-hit wonders, hits from the 50s to the 90s and also legendary radio DJs from the 50s to mm by major city. With Detroit in the 1990s, it showed Big Daddy Arthur P who was with WRIF from 1971 - 2009. It also showed Terry "Motormouth" Young. He was in the Detroit area from the mid-80s until 1991 or 1982. He was a part of the fox 99.5 which played pop hits all the way until Christmas Eve 1992. On that day, did there's some special about killing the fox and it ended with a scary computer voice countdown from 63,752 to 1. About a week later, the station went to talk for a few months. After that, it went to country where it remains as of late December 2019. Apparently, Terry young is a part of Sirius XM on the 60s Channel now.
After the radio info screen, I advanced further into the basement to see an 80s rock and metal section and also a Grunge music section. Although looking at some of the stuff from the 60s was good, I felt a little more at home. 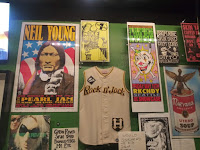 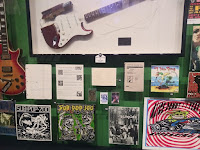 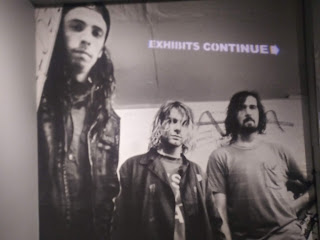 Also, in the basement was a small movie theater presenting a 30-minute documentary about American Bandstand. At first, I was thinking about Michael Moore when he confronted Dick Clark in Bowling for Columbine, the next his final Dick Clark's New Year's Rockin’ Eve.

American Bandstand started somewhere in the early 50s and ended when I was 7 (in 1989). Although I'm not a big fan of the 50s 60s and early 70s music (as they showed that in the beginning), it was very interesting to see all that. I got more interested in the 1980s previews on that movie though. Been getting a little repetitive with my love for 80s music, eh? Fast-forwarding a little bit, before I left the basement, I saw the Sirius XM broadcasting room for Rachel Steele broadcast on weekdays 11 a.m. - 5 p.m. on channel 25. She happened to be on vacation that day. Bummer, I wanted to see that in action.
The second story had The Garage where one can practice on the guitar, bass or drums. There happened to be some young musicians at the other end of the garage playing Enter Sandman by Metallica. The third story had a display for the 2019 entries of the Rock and Roll Hall of Fame. Two personal favorites are Stevie Nicks and Def Leppard. Other "sort-of" favorites are Radiohead and Roxy Music. Radiohead is one of those bands I should listen to do to my enjoyment of psychedelic Rock, but all I can do is Creep. With Roxy Music, all I know is more than this, a very good track from Vice City and a minor hit called Avalon. I also got to vote for candidates for 2020. However, I think Rolling Stones will take their own picks regardless. 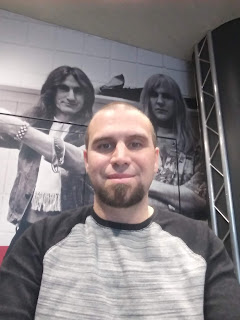 I had to get a picture of me and Rush. Sadly didn't get Neil though.
Let's go to The Christmas Story House, shall we? I left the Rock and Roll Hall of Fame after being in there for 2 and 1/2 hours. I walked around Cleveland for a while and later searched for some Mediterranean food. Google lead me to a place that was closing at 3 pm. I got there at 2:20 to see a closed at 2 p.m., with two written over three on their holiday hours sign. I took an Uber to the Christmas Story House Dulce free parking was available at Bumpas' house, Motherfuker!
One had to buy a ticket at the gift shop. The line was about 20 minutes long and the clerk who sold me the ticket it seemed pissed off. I got to go inside and view the house and took some photos. 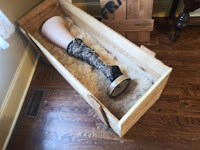 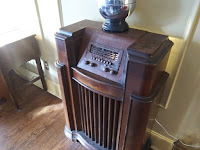 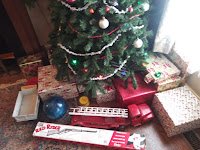 Then some of the upstairs, I got to visit Ralphie and Randy's room. Visited the bathroom too with Ralphie's Journal, don't forget to drink your Ovaltine. I also got to use the phone too... And the backyard, waiting for Black Bart. 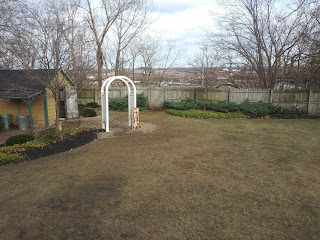 The museum across the street was more like a behind-the-scenes look to the movie, with photos and letters from 1983.
I took an Uber back to downtown but stopping at Buffalo Wild Wings first. I was hoping that somebody was sitting at the bar, I wanted to have a chat with a Clevelander. Instead, I chatted with the female server with a lip piercing. We didn't say much to each other. I said that I was from Detroit. She asked if I was going anywhere else after this, I said I was taking a scenic route back home. After I was done with my late lunch, I thought about going for a ride on the trolley. Is stopped a block away from me, I tried to walk quickly to it but it drove off, damn. I walked back to my parked car and took off on State Route 2, which also becomes State Route 20 and US Highway 6. I stopped at Huntington Beach to enjoy some of the unusually warm weather on December 26th. 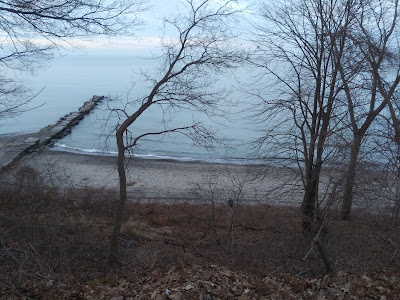 I kept traveling down U.S. Highway 6, (State routes 2 and 20 split off) and passed by Avon Lake, Sheffield Lake, Lorain, Vermilion, and Huron. Route 6 was nice for a 40 mile per hour ride without people really slowing down or stopping. Unlike in Macomb County Michigan, people so down for no reason or drive under the speed limit most times and not. I eventually ran into State Route 2 and took it all the way to Oregon, Ohio. A town I pass by on route to was Bono. When I passed it up, it didn't look like a happening type of place. Heck, there is a small sign that shows the town name. But according to Google, the bar is a pretty happening place. During this whole time, I was driving on Route 2, I was able to drive study with no slow down when the road was going straight. Route 2 does have some twists and turns where you have to slow down. I've been on Michigan country roads where they are paved smoothly with hardly any twists and turns. And for some reason, drivers slow down for no reason or drive 10 miles under the speed limit.
I arrived to the Golden Corridor area where I live, and of course, somebody on Hall Road at a stale green light hits the brakes. Seems that Ohio drivers are better than us Michiganders.
Posted by Robbie Thomas at 7:37 AM