Governor Whitmer had finally called for a "Stay Home, Stay Safe" in effect until April 13. I suppose, for the most part, I'll be at home trying to better myself when I get the inspiration. I finally got this done: 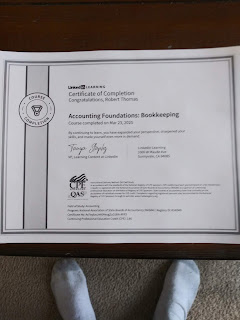 Thanks to my HyperFocus for that one! I'm looking to get Excel certified next.

For the state of Michigan, Governor Whitmer first put an order that restaurants to do carry-out and delivery only. Bars got closed and later, the spas and hair salons got closed after. Today, it was announced that Michigan joined the Stay At Home wave.

When it comes to the possible end of the world or something extreme happening, I knew we would see something. I always thought it was going to be nuclear doom or a civil war. I see quite a few people get pissed off over politics and I thought the US Election 2020 would bring some riots. I never thought it was going to be a virus. Apologies for being repetitive on that via my last post.

Michigan so far has 15 deaths due to the Coronavirus with over 1,000 cases. We also had our first death in Macomb County.

I saw some posting from one of my co-workers that we aren't returning to work until April 14th. Once I come back, I go back to the Assembly Line, I got demoted from Process Tech, damn! I wasn't the only one at my place of employment to get demoted, about 15-20 of us are. My best guess is that we are going into a recession and it'll take a while for the economy to come back. Perhaps later this year, I can go back to Process Tech as opposed to grunt labor that anybody could do.

A few hours ago, the EAS tone rung on my phone with the "Stay Home, Stay Safe" statement. The folks who are here from my WishesNetwork channel would know something about that.

I will post more on the way. I'll try my best not to get injured or go mentally insane, the hospitals near me are full.


As close as I can get with Baseball. #MLB #RookieOfTheYear pic.twitter.com/TIM2ob6GEC
— Robbie Thomas (@RobbeeWrite) March 22, 2020